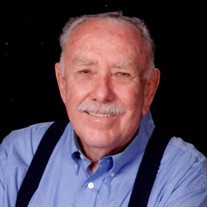 Senior Chief William (Bill) English (RET), age 85, passed away on Sunday August 22, 2021 in Gretna, Louisiana. Mr. English, a retired United State Navy Senior Chief served for 27 years in locations including multiple tours to Italy, Sicily, Antarctica, the U.S.S Fulton, Rhode Island, and New Orleans where he ultimately retired. He met and married his wife of 63 years, Rosaria, in Naples Italy. Together, they traveled, raised a family, and made many close friends. He was a generous man who was always willing to lend an ear. His hobbies included fishing, boating, motorcycles, cooking with Rosaria, woodworking, classical music and reading. Mr. English is survived by his wife, Rosaria, his two children, Ralph (Woody) English and Mary Ann Price, seven loving grandchildren, seven beautiful great-grandchildren, two brothers Paul English and Clyde English, and his sister Diane Smith. He was preceded in death by his son, Robert “Bob” English. Mr. English was born in Dudley, Georgia to William “Jack” and Mary Fleming English. Mr. English, by his own admission, lived a full and generous life enjoying time with his family most of all. Family and friends are invited to attend a Memorial Visitation at St. Cletus Catholic Church, 3600 Claire Avenue, Gretna, Louisiana on Friday, September 3, 2021 from 10:30AM until 11:30AM. A Memorial Mass will be celebrated at St. Cletus Catholic Church on Friday at 11:30AM with burial in Westlawn Memorial Park Cemetery, Gretna, Louisiana. MOTHE FUNERAL HOME is assisting the family during this difficult time. Family and friends may offer condolences at mothefunerals.com

The family of Senior Chief William "Bill" English (RET) created this Life Tributes page to make it easy to share your memories.