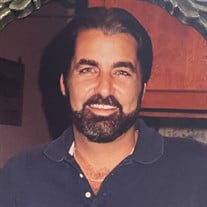 Charlie R. Wininger earned his heavenly wings on September 11, 2021 while in the arms of his loving family. Charlie was born in New Orleans, Louisiana on April 15, 1952 to the late Charles J. Wininger and the late Emelda Dallam Wininger. Loving husband of P. Gail Wininger for 32 years. Father of Rachel Wininger Potter (Brian), Jacqueline L. Wininger, and Monica C. Bologna (Peter). Grandfather of Taylor, Tara, Madison, Megan, Bryan, Caity, Brayton, Lexi, Brianna, and Gage. Great grandfather of Trey, Cece, Caiden and Melody. Brother of Charlene Kline (Alvin), Linda Sheppard, and Connie Delatte. He is also survived by many nieces, nephews, and cousins. He graduated from Behrman High School in 1970 and went into the United States Air Force Reserve(s) from which he was honorably discharged. Following active duty, he went to work in the maritime industry. He obtained his license as a United States Coast Guard Merchant Marine Officer and was qualified as a master of steam or motor vessel of any gross tons upon the rivers, radar observer-inland and First-Class Pilot of steam or motor vessels of any gross tons upon the lower Mississippi River from the head of passes (Gulf of Mexico) to Baton Rouge. He worked for the U.S. Coast Guard Marine Safety Office as a Vessel Traffic Control Specialist, Civilian Personnel, Office of Homeland Security. He received the Commander’s Award for Civilian Service, Sustained Excellence in Federal Service, and was recognized as a Founding Member of the Department of Homeland Security. He retired after 33 years from the Government of the United States of America. He leaves behind a legacy to love life, live life and be grateful for the life you live and those you love. In lieu of flowers the family requests donations to the St. Jude Children’s Hospital or the American Lung Association. Friends and family are invited to attend a Memorial Mass on Tuesday, September 21, 2021 at 12:00 PM at St. Cletus Catholic Church, 3600 Claire Ave., in Gretna. Visitation will begin at 10:30 AM. Please visit WWW.MOTHEFUNERALS.COM to view and sign the online guestbook.

Charlie R. Wininger earned his heavenly wings on September 11, 2021 while in the arms of his loving family. Charlie was born in New Orleans, Louisiana on April 15, 1952 to the late Charles J. Wininger and the late Emelda Dallam Wininger. Loving... View Obituary & Service Information

The family of Charlie R Wininger created this Life Tributes page to make it easy to share your memories.

Send flowers to the Wininger family.