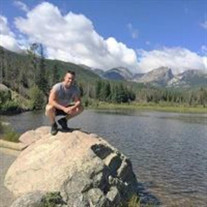 Spencer Hudson, our beloved son and friend to so many, passed away into never fading memories suddenly and unexpectedly at 0203 on March 20, 2022. Spencer leaves behind his mother, Jennifer Hudson, father, Felton Hudson and his love, Ellie Kang. Spencer’s grandparents, Charles and Quigg Piper, Charles Hudson and Ann Townley preceded him in death, but not in his love. His friends and other family members are too many to enumerate here, but all know their high standing and love with him. Spencer was born September 29th, 1975. His 46 years of life were cut short but full by any measure. He traveled the world over, making two orbits around the planet, once going east and once going west. His visits to foreign lands were many (and not just airport arrivals and layovers) often staying months if the place stirred him. In all, he visited over 90 countries. He had a passion for nature, and this was reflected in the fact he visited more than 25 national parks. He was a man of the Earth, especially concerned with the care of our only residence; its overpopulation, ecology and the need for nurturing it. Litter was an anathema to Spencer, and he routinely picked up trash wherever he was in reverence to Mother Earth. Spencer loved sports and participated in many, including golf, tennis, basketball and soccer. His love of soccer and world travel was manifested in attending five World Cups located in France, Germany, Russia, Brazil and South Africa. Unfortunately, his plans to attend the upcoming cup in Qatar this year is no more. Spencer’s knowledge of college basketball is unsurpassed. This coupled with his mastery of words and fundamentals of knowledge made him a formidable trivia player. Spencer’s education includes the attainment of a Bachelor of Science degree in History from the University of Massachusetts in Boston. He also attended the University of Georgia and University of Montana as part of his undergraduate experience. His post graduate education included significant course work toward earning a Master’s degree at the City College of New York and the University of New Orleans. Spencer’s personal quest for knowledge and learning was ongoing and not limited to the classroom. He owned a personal library of over 1,045 books of value and substance. He had read over 972 books and 73 were on his future reading list. Spencer first visited New Orleans while in high school. He immediately fell in love with the city’s history, architecture and French culture. This love of NOLA never waned. He was a resident of the Marigny for many years. Spencer did not lose his life because he was in the wrong place at the wrong time. He was on the job working hard at the Cat’s Meow on Bourbon Street where he worked off and on for more than 20 years. He leaves behind many of the present and former staff in his close circle of friends. The management of the Cat’s Meow and crew members have been superb in showing their love and respect for Spencer making his passing bearable. For that, his parents and Ellie are eternally grateful. May Spencer’s senseless death have some meaning as we see the respect of life and law and order sliding away across our nation. The hole in the hearts of Spencer’s parents, family and friends is massive. Family and friends will gather on Friday, March 25 here In New Orleans to celebrate his life and a Memorial Service will be held at a later date in Georgia. Family and friends may view and sign the online guest book at www.mothefunerals.com.

Spencer Hudson, our beloved son and friend to so many, passed away into never fading memories suddenly and unexpectedly at 0203 on March 20, 2022. Spencer leaves behind his mother, Jennifer Hudson, father, Felton Hudson and his love, Ellie... View Obituary & Service Information

The family of Charles Spencer Hudson created this Life Tributes page to make it easy to share your memories.

Spencer Hudson, our beloved son and friend to so many, passed...

Send flowers to the Hudson family.