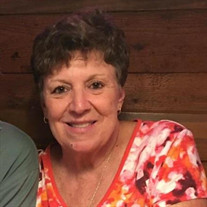 Carol Ann Oubre, age 75 passed away on Tuesday, June 22, 2021 surrounded by her loving family. She was born on January 15, 1946 in New Orleans, Louisiana and was a lifelong resident of the Westbank. Beloved wife of Robert “Bobby” Oubre, Sr. for 56 years. Mother of Stacie (David) and the late Robert “Bobby” Oubre, Jr. (Michele). Grandmother of Ashley, Brittany, Meagan (Jordon) and Travis. Great Grandmother of Brooklynn. Loving sister of Raymond (Debbie), Clarence (Debbie), Connie (Will), Ray (Half Brother) and In Laws, Jane (Gibson), Janice (Mike) and the late LJ (Judy), Pee-Wee and Michael (Barbara). She is also survived by a host of nieces and nephews. Carol also did not want to forget to include her pets, Bella and Paris who she adored. Carol’s favorite thing to do was going on vacations with family, such as going on Cruises, going to Gatlinburg, Tennessee, to Mississippi Gulf Coast with her loving husband, Bobby and her most favorite place in the world was Disney World. She is preceded in death by her loving mother, Helen Pitre; Step Father, Mr. Gerald; and her biological father, Raymond Heigle, Sr. (Survived by Ruby) as well as her Grandma and Grandpa Smith. Family and friends are invited to attend the visitation at MOTHE FUNERAL HOME, 7040 Lapalco Blvd., Marrero, Louisiana on Wednesday, June 30, 2021 from 11AM until 1:30PM. A Funeral Mass will be held at the funeral home on Wednesday at 1:30PM. Interment will be in Westlawn Memorial Park Cemetery, Gretna, Louisiana. Family and friends may offer condolences at mothefunerals.com.

Carol Ann Oubre, age 75 passed away on Tuesday, June 22, 2021 surrounded by her loving family. She was born on January 15, 1946 in New Orleans, Louisiana and was a lifelong resident of the Westbank. Beloved wife of Robert &#8220;Bobby&#8221;... View Obituary & Service Information

The family of Carol Ann Oubre created this Life Tributes page to make it easy to share your memories.

Send flowers to the Oubre family.