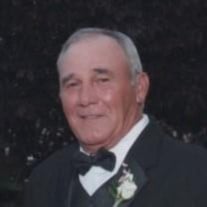 Carol James “Black” Blanchard, age 73, passed away on October 29, 2020. Loving husband of Pamela Buras Blanchard for 53 years. Father of Troy Blanchard, Chad Blanchard (Tiffani), and Hope Blanchard Saavedra (Mario). Grandfather of Anthony Treadaway. Also, survived by a host of nieces, nephews, cousins, god-children, in-laws, and many friends. A native of Breaux Bridge and resident of Boothville-Venice, Carol was born on July 12, 1947 to the late Lillian Smith Blanchard and Sidney Blanchard. Brother of Kenneth Blanchard (Margie) and Robert “Bobby” Blanchard (Kim). As a young man, he served 2 years for his country after being drafted into the U.S. Army. After being honorably discharged, he began work in the oil field for Getty, Texaco, and Chevron. He retired from Chevron and was blessed to make many friends along the way. In his younger years, his second home was the ballfield. He played semi-pro baseball and coached many women’s, girls’, and boys’ teams to championship victories. He was a kind and gentle man that loved to laugh at his own jokes and make people smile. Friends and family are invited to attend a memorial prayer service at 1:00PM on Saturday, November 7, 2020 at Mothe Funeral Home, 7040 LAPALCO BLVD., in Marrero. Visitation will begin at 11:00AM. Interment will be private. All visitors are required to wear their own masks and keep a social distance while following the current COVID19 mandates. Please view and sign the online guestbook at WWW.MOTHEFUNERALS.COM

The family of Carol James Blanchard created this Life Tributes page to make it easy to share your memories.

Send flowers to the Blanchard family.