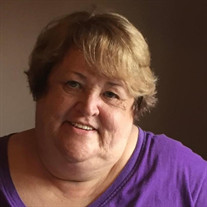 Bonnie Jean Camardelle, 72, peacefully gained her Angel Wings to Heaven in her home on January 20, 2022 with her family by her side. Bonnie was born to the late Lucien Ganier Sr. and the late Naedia Ganier at French Hospital in New Orleans, LA where she grew up with her two late brothers, Terry Ganier and Lucien Ganier Jr. Bonnie attended St. Mary Magdelen as a devout Catholic where she professed her life to Christ at an early age. She loved attending Church and cherished praising the Lord. Bonnie was married to her late husband, Terry Jude Camardelle for nearly 55 years. In January 1965, Bonnie met Terry at the Canal Bank Inn. They were united in Holy Matrimony and Blessed with their daughters soon after. Along with being a devoted house wife, mother, grandmother, sister, aunt and friend, she was also a business owner, worked for Nicholson & Loup as well as East Pavillion. Bonnie enjoyed reading the Bible, praying for others, spending time with family, ceramics, playing cards, bingo, pokeno, watching movies, listening to music (Otis Redding) and helping the blind or less fortunate. Bonnie will be incredibly missed and remembered as a unique and caring individual who touched the lives of all who knew her. She was sweet with a side of zest and happily spoiled the ones around her without complaint. Bonnie is survived by her daughters, Bridgette Camardelle Mendoza and Brandie Camardelle Braud (Christopher Braud); her grandchildren, Raelynn Mendoza, Ramon Mendoza III, and Crislyn Braud (Kris Marcel Jr.) and her Cockatiel, Tweet. Visitation will be held at MOTHE FUNERAL HOME, 7040 Lapalco Blvd. Marrero, LA 70072 on Monday, January 31, 2022 at 9AM until 1:30PM; Mass in the Chapel at 1:30PM. Burial following the Mass at Westlawn Memorial Park, 1225 Whitney Ave., Gretna, LA 70056. Face coverings are required. Family and friends may offer condolences at mothefunerals.com.

Bonnie Jean Camardelle, 72, peacefully gained her Angel Wings to Heaven in her home on January 20, 2022 with her family by her side. Bonnie was born to the late Lucien Ganier Sr. and the late Naedia Ganier at French Hospital in New Orleans,... View Obituary & Service Information

The family of Bonnie J. Camardelle created this Life Tributes page to make it easy to share your memories.

Send flowers to the Camardelle family.