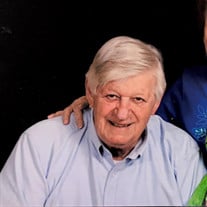 Billy Roy Cannon, age 79, passed away on February 24, 2022. Loving husband of Marie Kass Cannon for 57 years. Father of Chris Cannon (Tiffany) and grandfather of Eli Cannon and the late Nathaniel Cannon. A native of Labadieville, LA, Billy was born on November 29, 1942 to the late William Roya Cannon of Birmingham, AL and the late Margaret Catoire Cannon. Brother of Virginia Cannon Parr, the late Juanita C. Cardenal, and the late Milton Roy Cannon, Sr. Billy is also survived by Rodney and Keith Cardenal, Dino Casbon, Jason and Shannon Ford, Mickey Cannon, Jr., Buddy and Carolyn Kass, Steven and Brian Cook, Jennifer Cook Davis, Kelley Kass Toups, Tracy Kass, and Jody Kass. Billy was an Electrician’s Mate in the U.S. Navy. After his service in the Navy, he worked as an electrician for R.J. Robert Services, Hooker Chemical, Amerada Hess, and Marathon Refining. He was an active member of the Knights of Columbus and was awarded the Order of St. Louis Medallion from the Archdiocese of New Orleans. He was an avid outdoorsman who loved to hunt and fish. He spent many days with his family at his camp on Bayou Segnette. He will be dearly missed by his family and friends. Friends and family are invited to attend a Funeral Mass at St. Anthony Catholic Church, 701 Burmaster St., in Gretna, LA on Friday, March 4, 2022 at 11:30AM. Visitation will begin at 9:45AM. Interment will follow immediately at Restlawn Park, in Avondale, LA. Please visit WWW.MOTHEFUNERALS.COM to view and sign the online guestbook.

The family of Billy Roy Cannon created this Life Tributes page to make it easy to share your memories.

Send flowers to the Cannon family.