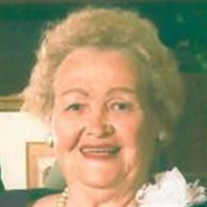 Mrs. Betty Sue Wilkinson Keslick, born in Philadelphia, Mississippi on October 19, 1930, quietly passed away in her home in New Orleans, Louisiana on February 17, 2022. Mrs. Keslick was preceded in death by her husband of 63 years, Maj. William Eugene Keslick, USAF (Ret.) of Bloomington, Illinois in 2019; her father Emmett Joshua Wilkinson in 1975, her mother, Mary Lee Harrison Wilkinson in 1977, her son William Brian Keslick in 2021, her brother James “Jim” Wilkinson in 2020, her sister-in-law Mrs. Kenneth Carolyn Wilkinson in 2019, and her son-in-law Frank Bruno Giordano in 2017. Mrs. Keslick is survived by her loving daughter Katherine Keslick-Miller and her son-in-law Derek Miller of Catskill, NY; her beloved daughter Julia Keslick Giordano of Gretna, LA; four grandchildren, Christine A. Giordano and Frank E. Giordano of Gretna, LA; Laura K. Miller and Bryan M. Miller of Catskill, NY; and two brothers, Kenneth Wilkinson of Niantic, CT, and Pat Wilkinson and sister-in-law Beverly Wilkinson of Little Rock, AR. Mrs. Keslick was born in Philadelphia, Mississippi and graduated from Philadelphia High School in 1948. Mrs. Keslick then attended Mississippi State College for Women at Columbus, Mississippi, graduating with a Bachelor of Arts degree in History in 1952. She then taught high school at Moss Point, Mississippi. In 1955, she married Maj. William Keslick (Ret.) and moved to Anchorage, Alaska, where she continued to teach school. Mrs. Keslick retired from teaching in 1957 and began her family as a stay-at-home wife and mother. After many relocations with Maj. Keslick during his USAF career, she then settled in New Orleans, LA in 1966, where she was a resident of the Algiers area for 56 years. A devout Christian, Mrs. Keslick, attended Berean Bible Church in Algiers since its early inception in the 1980’s. She was also a member of Christian Women’s Club for many years. An avid and compassionate animal lover, she spent much of her retirement years caring for the neighborhood feral cats, as well as her own beloved pets. Visitation will be on Friday, February 25, 2022, at 11:00 am to 1:00 pm, followed by services at 1:00 pm at Mothe Funeral Home, 2100 Westbank Expressway, Harvey, LA 70058. Interment to follow at Westlawn Cemetery at 1225 Whitney Ave., Gretna, LA 70056.

Mrs. Betty Sue Wilkinson Keslick, born in Philadelphia, Mississippi on October 19, 1930, quietly passed away in her home in New Orleans, Louisiana on February 17, 2022. Mrs. Keslick was preceded in death by her husband of 63 years, Maj. William... View Obituary & Service Information

The family of Betty Wilkinson Keslick created this Life Tributes page to make it easy to share your memories.

Send flowers to the Keslick family.