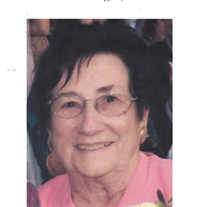 Betty Jane Ledet Berger, passed away peacefully on September 25, 2021 at her home, following a lengthy illness. Betty was born on March 18, 1938 to Louis and Daisy Ledet in Westwego, LA. After graduating from Westwego High School in 1955, Betty worked in New Orleans until meeting the love of her life, Richard Charles Berger and marrying in 1957. After her marriage, she and Richard moved to Italy where she lived until 1960. Betty and Richard went on to have 6 children. Betty was a lifelong resident of Jefferson Parish. Betty was predeceased by her husband Richard and daughter Karen Sue Berger, and by her parents Louis and Daisy Ledet, and brother Lloyd Ledet. She is survived by her children Debra Berger McGraw, Richard Charles Berger, Jr., Jacqueline Berger Coughlin, Gregory Paul Berger, and Valerie Berger Webre; her sisters Audrey Ledet Casso, and Judy Ledet Boudreaux; and her brothers Jerry Ledet, Roland Ledet, and Sterling (Butch) Ledet. Betty is also the proud grandmother of 14 grandchildren, Greer, Audrey, Zachary, Luke, David, Rachel, and James Smith (Debra); Ryan and Karen Berger (Richard); Natalie and Caroline Coughlin (Jackie); Bre'Ann Berger Kozak and Brennan Berger (Gregory), and Nathan Webre (Valerie). Although Betty was a loving and involved mother and grandmother, she was also a lifelong adventurer and loved to travel. She spent most of her retirement years traveling in the U.S. and abroad, often taking her children and grandchildren along with her. She had an interest in collecting antiques and vintage glass, and was a vendor in the antique shop Granny's Attic in Marrero for many years. She was an active member and past President of the Depression Glass Club New Orleans, and she was involved in numerous activities including Terrytown Ladies Tennis League, Westside Senior Bowling League, and played mahjong regularly, often hosting games and luncheons in her home. She loved to tell stories of her travels and her life growing up in Louisiana as a child of French speaking parents. She was proud of her heritage and as a result has passed on this legacy to her children and grandchildren. She loved dancing, cooking, gardening, music, puzzles and games, dachshunds, garage sales and flea markets. She had a zest for life and sense of humor that is rarely found and will be intensely missed by everyone she touched. In lieu of flowers, please consider donations to The Benson Cancer Center, 1516 Jefferson Highway, Jefferson, Louisiana 70121 (866-624-7637) in memory of Betty. A private service for the family was held at MOTHE FUNERAL HOME, 2100 Westbank Expressway on October 16, 2021 followed by burial at Westlawn Cemetery in Gretna, LA. Family and friends may offer condolences at mothefunerals.com.

Betty Jane Ledet Berger, passed away peacefully on September 25, 2021 at her home, following a lengthy illness. Betty was born on March 18, 1938 to Louis and Daisy Ledet in Westwego, LA. After graduating from Westwego High School in 1955,... View Obituary & Service Information

The family of Betty Jane Ledet Berger created this Life Tributes page to make it easy to share your memories.

Send flowers to the Berger family.