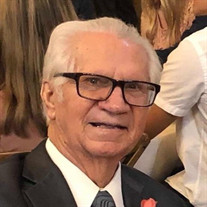 It is with great sadness that the family of Bernard “Nardy” Bush, Sr. announce his passing from this life due to complications from heart surgery, on Tuesday, October 5, 2021, surrounded by his wife, Rhea, and all his children. He was born in New Orleans on March 8, 1931 and raised in Gretna by the late Joseph Buren Bush and Marie Martha Bush. He is preceded in death by his son, Joey Bush and grandson, Ethan Bush; wife, Bettye Lynn Bush; his brothers: Bill, Roy, Chick, Buddy, Pat and Johnny Bush, as well as, his sisters, Frieda Bush, Ticker Chauffe and Frances Michel. He is survived by his wife of 31 years, Rhea Bush; sisters, Tootsie Lusignan and Claire Tomlinson; sisters-in-law: Mickey Bush, Barbara Jourdan, Carol Weiser and Che Matherne; brothers-in-law, Bob Jourdan and Earl Weiser; children: Beth Crawford, Ben Bush and Lynne (Tony) Benedetto; stepchildren: Jodi (Jeff) Elgiar, Jill (Mike) Downes and Jeff (Missy) Mendoza; grandchildren: Jeremy Crawford, Christian (Aimee) Crawford, Hannah Crawford, Katie (Neal) Bonham, Heather (Jonathan) Pierson, Emily Benedetto(Austin), Laci (Dylan) Chesterman, Elizabeth (Nick) Bonham, Matthew Elgiar(Leslie), Ryan (Kayla) Elgiar, Brent Schneckenburger, Blake Schneckenburger, Mason Mendoza and Ryan Downes; and great grandchildren: Caleb, Emma Rose, Townes and Anna Camille Crawford; Azrael and Ziva Pierson; Ella and Ozzy Elgiar; and Asher Bonham. Along with the above, a slew of nieces, nephews, extended family and many friends will miss him at all occasions as he always showed up with a joke, a great attitude, and a drink in his hand. He loved his country and was a proud Korean War Veteran and member of the Knights of Columbus. He was a skilled carpenter, gardener; great dancer and happy go lucky guy whose love for life was only outshined by how much fun he made life for others. He did regret that at 90 years old, he could not drink as much, dance as long or remember his punchlines which made him even more hysterical. He had a big heart, was loved by all, and was the favorite brother of Claire. Yep, he heard her say so. Family and friends are invited to attend a funeral mass on Thursday, October 14, 2021 at St. Agnes Church located at 3310 Jefferson Highway, Jefferson, Louisiana 70121. The visitation will begin at 10:00 AM, eulogies will be at noon, and the service starts at 12:30 PM. A private burial will follow at Westlawn Cemetery – MOTHE FUNERAL HOME in charge. In lieu of flowers, donations can be made to garysinisefoundation.com or a charity of your choice. Your prayers, a favorite drink and a toast to him are also appreciated. The family would like to send their deepest gratitude to the doctors and nurses in the East Jefferson General Hospital third floor ICU who cared for him so well.

It is with great sadness that the family of Bernard &#8220;Nardy&#8221; Bush, Sr. announce his passing from this life due to complications from heart surgery, on Tuesday, October 5, 2021, surrounded by his wife, Rhea, and all his children. He... View Obituary & Service Information

The family of Bernard Newman Bush, Sr. created this Life Tributes page to make it easy to share your memories.

It is with great sadness that the family of Bernard “Nardy” Bush,...

Send flowers to the Bush, family.