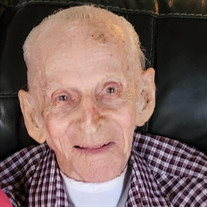 Arlen Glen Griffice, Sr. passed away peacefully on Wednesday, November 17, 2021. He was a native of Galveston, TX and a resident of Empire, LA. Arlen was born on October 10, 1931 to the late Lillian Holland Griffice and David Henry Griffice.... View Obituary & Service Information

The family of Arlen Glen Griffice Sr. created this Life Tributes page to make it easy to share your memories.

Send flowers to the Griffice family.