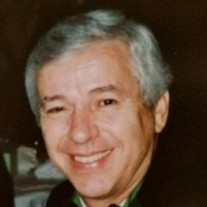 Adrien Frank LaPeyronnie, Jr. “Lap” Adrien was a kind and compassionate man, often providing support and encouragement to his family, neighbors, friends, and clients. He was not confined by strict formality and shared a mischievous sense of humor with many. Adrien passed away on Sunday, January 23, 2022 at his home with his family present. He was preceded in death by his beloved wife Beverly, and his parents, Adrien F. “Babe” LaPeyronnie, Sr. & Emma Sevin LaPeyronnie. He leaves behind his children: Adrian (Susan), Darren (Marla) & Glenn (Stacey); grandchildren: Alexandra, Adrian IV, Brandy, Beverly, Grant, Regan, & Cory Lantier (Jennifer); and great-grandchildren: Collin, Cole, Jayce, Camrynn, Cullen & Julianna. A 1950 Gretna High School graduate, Adrien lettered in varsity football and baseball advancing as a player for Gretna’s American Legion baseball team and was scouted by Louisiana State University’s baseball team. While attending LSU, Adrien enlisted and served active duty in the United States Coast Guard from 1953 – 1957 achieving rank of Yeoman (YN2) and was awarded a National Defense Service Medal and Good Conduct Medal. After serving his country, Adrien began his banking career at First National Bank of Jefferson Parish and was a 1972 graduate of the LSU School of Banking of the South. Following his 21 years at First National Bank, Adrien became President and CEO of Gulf South Bank and Trust and was a member of the Board of Directors. During his career, Adrien was a member of the Krewe of Janus and received numerous commendations for his service and generous contributions to local civic organizations. As a season ticket holder since 1958, Adrien was an avid LSU fan, spending many weekends with his wife cheering on the Tigers. Adrien and Beverly were fortunate to attend the LSU National Championship game of 1958 in Tulane stadium. Services will be held at Mothe’s Funeral Home, 2100 Westbank Expressway, Harvey, LA on Friday, February 4, 2022. Visitation is from 9-11am with his Memorial Mass at 11am. Interment of Adrien and Beverly will follow at Hook & Ladder Cemetery, 1000 Lafayette Street, Gretna LA. Family and friends may view and sign the online guest book at www.mothefunerals.com.

Adrien Frank LaPeyronnie, Jr. &#8220;Lap&#8221; Adrien was a kind and compassionate man, often providing support and encouragement to his family, neighbors, friends, and clients. He was not confined by strict formality and shared a mischievous... View Obituary & Service Information

The family of Adrien Frank "Lap" LaPeyronnie Jr created this Life Tributes page to make it easy to share your memories.

Send flowers to the LaPeyronnie family.