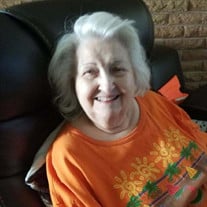 A. Louise Snowden Cioll Soab (Louise), age 92, passed away on Monday, July 26, 2021 from complications of a recent surgery for blood clots and kidney failure. She died peacefully at home with her family. Louise was the oldest of four daughters of Clarence Gilbert Snowden and Pearl E. Snowden of Jacksonville, AR (both deceased) and was raised on a farm during the Great Depression. She later moved to the “big city,” first Memphis and later to New Orleans. She married Nick Cioll, Jr. (St. Louis) in 1947 in Memphis, where they lived right out of the back gate of the Graceland Mansion before moving to New Orleans in the early 1950s. After Nick passed away in 1977, she was married to Joe Soab, and they enjoyed a happy marriage for 20 years until he passed away in 1996. She is survived by three children and their spouses: Nick Cioll, III and spouse Amy, Denise Cioll Glennon and spouse Michael, and Nancy Cioll Pierce and spouse Michael. She is also survived by two grandchildren: Megan Louise Glennon and Shannon Joan Glennon, and three sisters: Wanda Page, Sondra Moneyham and Janet Ward who will all deeply miss her. Louise and Nick Jr moved to New Orleans and settled on the West Bank in the new part of Algiers where she lived for nearly 60 years. They enjoyed bowling, the Aurora Country Club, playing poker, and being members of Mardi Gras Krewes (Louise was a member of the Krewe of Iris for many years). In her second marriage, Louise and Joe owned and ran several restaurants and a travel agency. After retiring, she spent her time with family and friends and traveling as much as she could. Louise was always looking for another adventure and her love of traveling continued until she took her last breath. She was loved by all who knew her and served as an inspiration in both the workplace and her personal life, and she will be dearly missed by all. Above all, she will be remembered for her infectious smile and unending optimism. The family knows she is at peace and safely home in heaven. Family and friends are invited to attend the Visitation at MOTHE FUNERAL HOME, 1300 Vallette Street, Algiers, LA on Saturday, July 31, 2021 from 11:30AM until 1:30PM. Funeral Services will be held at the funeral home on Saturday at 1:30PM. Interment will be in Westlawn Memorial Park Cemetery, Gretna, Louisiana. Family and friends may offer condolences at mothefunerals.com.

A. Louise Snowden Cioll Soab (Louise), age 92, passed away on Monday, July 26, 2021 from complications of a recent surgery for blood clots and kidney failure. She died peacefully at home with her family. Louise was the oldest of four daughters... View Obituary & Service Information

The family of A. Louise Snowden Cioll Soab (Louise) created this Life Tributes page to make it easy to share your memories.